Report on the Gasshuku in Lilleshall

The second Gasshuku of the KSK - Academy in 2006 took place in the National Sports Centre of UK, Lilleshall. The estate of the National Sports Centre was constructed in 1831, originally it was a family property and a hunting lodge belonging to the Duke of Sutherland and his family. In the meanwhile, this estate has become one of the best training facilities in England. It is better known by the name Lilleshall National Centre for Excellence. It is similar to the well-known German sport centres, because it offers optimal training conditions for the top athletes.

Before we arrived in Lilleshall we still had to overcome few minor obstacles... ?

We all met at the check-in counter of Easyjet and heard that there hade been some slight changes in the luggage conditions. We were not allowed to take any more our trolleys on board, even though they were checked in as carry-on luggage. Instead, they were taken as passenger luggage. The down side of it was that Sensei Pascal had to pay extra 75.00 euros because now he exceeded the baggage limits; he had more than three pieces of luggage that weighed more than the allowed 20 kg.

The airplane took off on time and the overall flight was rather smooth, despite of some heavy turbulence just before landing in Lennon Airport, Liverpool. While probably all the others said quick prayers, the little Christopher found these turbulences very adventurous and enjoyed them tremendously. Quite on the contrary, Petra didn't find them fun at all and got intimately acquainted with the infamous paper bag After the landing Christopher asked Petra if she was pregnant, because she had thrown up. oh yes.

The landing and the exit out of the airport went without any problems. This time Sensei Pascal didn't have any kind of mishaps and he even managed to leave the security zone with all of his baggage.

While Jasmine and Christopher were collected by Jasmines uncle, we five karatekas took a car and drove to Lilleshall. Before the departure, Gerhard had rented a car, a Vauxhall (=Opel) Zafira with for us continentals the a bit unfamiliar right-hand drive. Due to the financial restraints, Gerhard and Pascal were the only registered drivers. Thank goodness, this time I didn't have to drive. 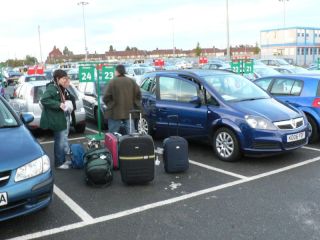 After a while Gerhard had gotten used to drive on the ura-side, and around 9 pm we reached the Sports Centre in good health. The Centre was located on the estate that used to belong to the Duke of Southampton. Sensei Pascal left directly to dinner organised for the Shihankai colleagues and the Executive Committee of the English Shotokan Academy. We others were ready for an adventure and dined in an Indian restaurant.

The training started punctually on Saturday morning at 9.30 o'clock. First, there was an introduction of the Shihankai members and the newly elected Executive Committee of the KSKA as well as the 85 karatekas from Sweden, Finland, Belgium, France, Greece, Serbia, Portugal, Ireland, Scotland, England and Germany. Then we started the first of total 4 training sessions.

Sensei Pascal Petrella gave the first training. He focused this time instructor education. This time it wasn't any usual power-training but rather a session for, how to learn in order to be able to teach. He reminded us that we dan-level practitioners of KSKA are also instructors. Therefore, we need to understand how we can pass on the techniques and principals of Kase Sensei and how to perform the techniques correctly. I think that with this message he shook few of us up.

The subject of his training was rooting of the body to the ground, abdominal breathing and transfer of energy through the abdominal breathing. He divided the training in two parts. The first part concentrated on the rooting, the inner stability and balance within a position while using tanden energy. The objective was to stay in a solid and stable stand without tension, and to be relaxed enough to execute the next technique. To have this feeling of stable and yet relaxed position, Sensei Pascal let us first run through Taikyoku Shodan. We all knew the kata, so we could better concentrate on the inner stability and the relaxed position. The goal was to make a short strong kime point at the end of a technique, then have a full relaxation in order to perform the following technique fast.

Next, we tested our stability with a partner: one partner stood in fudo-dachi and the other tested his position by pushing and pulling him.

During the second part of the session he focused on the correct abdominal breathing technique when executing a karate technique, and combined it with a sharp contraction of the abdominal muscles that Sensei Kase used to call "the tanden power". The goal of this second training unit was to combine a fast exhalation with a sharp contraction of abdominal muscles in order to execute explosive techniques. Sensei Pascal emphasised over and over again that one can execute a fast and dynamic technique only from an absolutely relaxed position.

Then again, we practised with a partner. We let our partners to press their fingertips deep in to our stomach, then we exhaled and contracted our abdomens simultaneously to push them away as swiftly as possible.

If you had thought that this training shall be "a light, relaxed early morning session to wake up" you were badly mistaken. Admittedly, the session wasn't physically extremely exhausting, however, it required a high level of concentration on the breathing technique and the correct use of tanden energy.

His subject was the bunkai of the kata Gojushiho-Dai. First, we learned the order of the bunkai as a kihon exercise. Then we practised and used the techniques with a partner.

The bunkai of Sensei Jim covered many possibilities of fighting distances. Sensei Jim had integrated all the distances into this bunkai, from a long distance attack to a close combat, and finally to throwing techniques. The priority wasn't so much the beauty of the technique but its effectiveness. Just the ground fighting was missing.

Hard and direct counter techniques, especially into the gedan area, were characteristic for the bunkai. Close combat wasn't definitely excluded from this bunkai!

The attacker's concentration was challenged too. The usual "one-time zuki or keri attack" did not suffice. Jim expected from the tori a combination of attacks, or to block the uke's first counter followed by a second attack. That is why this bunkai training was both physically and mentally challenging.

After these two training units it was time to relax. At 7 pm we were invited to a gala dinner, where we laughed, talked and danced a lot. Sensei Mike Fedyk, Chairman of the ESA, had invited the singer Alexandra to accompany the gala dinner with her music.

Some pictures from the party. During the dinner Gerhard managed to capture the atmosphere at different tables with his camera.

Sensei Velibor Dimitrijevic from Greece gave the third training session. He worked on breathing, kime and stable positions too.

A strong stand is based on a natural leg position, not on a tensed one: 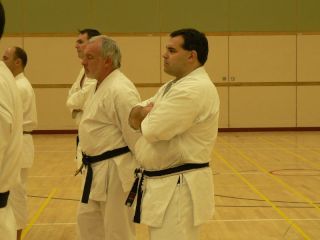 Sensei Pascal and Sensei Dirk are listening to Sensei Velibor

His session was anyhow different to Pascal's. He e.g. explained to us how to keep the abdominal muscles tensed in spite of inhaling and exhaling.

He had created a kihon that at first was performed without arm techniques. Primarily, we concentrated on moving on the correct breathing. Later, we added open and closed hand techniques as well as kicks. An additional objective of the training was to show us the development of the kime in hente techniques combined with breathing, which meant that one executed several techniques with the same arm on one single exhalation. If one inhaled in between, the flow of energy of the hente techniques would be interrupted. This was again a training unit demanding a high level of concentration.

Sensei Pascal Lecourt from France gave the last training unit. His subject was the kata Nijushiho. To start with we practised the kata in all the familiar forms Sensei Kase had taught us, omote, ura, go and ura-go, which lead occasionally to some confusion ?

As a transition to bunkai, Sensei Pascal showed us the attack sequence as a kihon exercise, and afterwards he demonstrated the application of it. Even though also his bunkai was combat oriented, it consisted of applications that were new to some karatekas, therefore it was necessary to train with due intensity. Like during Sensei Jim's training, the attacker had his own obligations to work with block and counter techniques.

This kind of bunkai training requires a high level of concentration from both parties. However, it makes clear that the bunkai is not a rigid and one-sided exercise, but serves to pass on the principles of the kata and the combat.

It was remarkable that all the trainers were there for us and supported us in word and in deed. This helped us significantly to understand the content of the training better, and it kept our motivation on a high level.

All of the four senseis tried in their way to pass on their understanding of Kase Sensei's karate. It is basically up to each karateka, what he or she takes back home from this kind of training. There was something for everybody, and all of us got many new ideas or understood things that had remained in the dark until then. 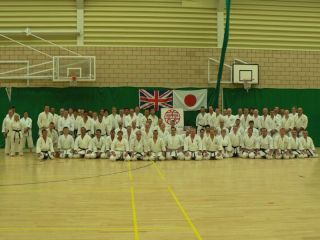 Group photograph with all nationalities!

After the training, many of the participants were unfortunately busy to get their planes, thus we ended up with only a little time for further conversations.

The next Gasshuku will take place in Finland in 2007.