On the Death of Sensei Kase

Having long suffered from strong back pains Sensei Kase fell critically ill on November 6 2004 and was diagnosed with a vertebral abscess, a streptococcus infection of the leg as well as cardiac insufficiency. After 41 days of treatment and his refusal to be transferred to a rehab-center, Sensei Kase was released from the hospital and continued his convalescence with the assistance of a physical therapist at home. After at first not being mobile and thus gaining weight, he eventually was able to walk with the aid of crutches. Step by step he appeared to be recovering.

On Friday, November 19th at 8 in the morning, his wife tried to wake him up. But he was unconscious. The doctor was called and Sensei Kase was brought to the intensive care unit where he remained in a coma from which he wouldn't awake. The coma was probably caused by an interruption of the blood supply to the brain. This dramatic situation became more critical with the diagnosis of pneumonia. Between November 22nd and 23rd he suffered from two heart disorders within 12 hours time. On Wednesday, November 24th at 5:25 p.m, in the company of his family and some close friends, Taiji Kase passed away.

On the 26th his body was brought home for his family to mourn and say good-bye in private. On November 28th and 29th Sensei Kases students came to pay their last respects to their teacher and mentor. Dressed in his gi and partially covered by a white cloth he lay in his office with a peaceful expression of contentment on his face. In keeping with Japanese tradition, we mourners lit incense, rang a small bell and meditated in remembrance of Sensei Taiji Kase.

Sensei Kases two brothers, who had arrived from Japan, were surprised and moved by the number of grieving people who came to pay their last respects. Apparently they were unaware of their brothers importance and leading position in the world of karate and were surprised at how many people found inspiration in Sensei Kase. The wake concluded with those present relating impressions and stories of their experiences with him.

The funeral was held on Tuesday, November 30, 2004 at 12:30 in the afternoon in the crematorium of Pere Lachaise in Paris. About 350 people from around the world attended. One of the last pictures taken of Sensei Kase had been placed in the center of the room where he smiled upon us with his fatherly expression. A compilation of Japanese songs sung by Japanese singers much favored by Sensei Kase was chosen to be played and Bruno Garnero celebrated a traditional Tibetan prayer. Condolence cards from many different countries were tearfully read by members of the family. His brothers thanked everyone for coming and sharing their memories with the family. The younger added that it would be very difficult to convey our condolences and memories to their mother, who is 101 years old.

While saying his last good bye, Sensei Shirai directly addressed Sensei Kases coffin. He apologized for his mistakes, thanked his teacher for all that he had been given and promised to continue his work in the spirit of Sensei Kase. As the coffin was carried to the crematorium, a very emotional voice cried "Sensei, Oss!" Moved by this last call of respect, the call was taken up and all present joined in a reverberating "Oss, Sensei!" There are no words with which I can express the atmosphere and emotions of this unforgettable moment. These two simple words managed to express all the sorrow and grief but also the gratitude and happiness that we feel for the life and death of our Sensei.

As a last gesture of closure all the guests once again offered the Kase family their condolences. Mrs. Kases suffering and grief over the loss of her husband was obvious. Many memories and words of thanks were written in the condolence book. Sensei Kase and our many memories of him will have a permanent place in our hearts. It is now our duty to pass his teachings of humanity and respect and his way of performing karate on to future generations. I hope that we will all embrace this challenge and enable his memory and teachings to continue to strive. 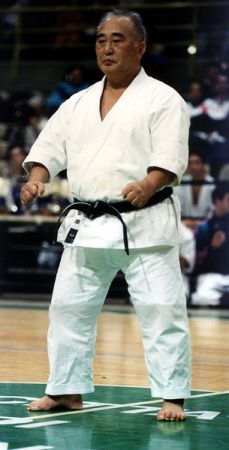 On Sunday, December 5, 2004 almost 100 friends followed the Kase familys invitation to celebrate the life of Taiji Kase at the hotel Mercure. Upon arrival each guest was presented with a white rose. We were then seated at round tables spread throughout the room from which we could see a screen flanked by a band on the left and a large picture and the urn of Sensei Kase on the right. The band played a song composed by Bruno Garnero for Sensei Kase and a special Kyudo presentation was performed. The performance was perfectly executed and the amount of hard work necessary for such perfection was obvious to all. This accomplishment should be an example for us to keep in mind during our own training.

After the Kyudo presentation, photos were shown chronicling the life and death of our Sensei. This was followed by a video clip of his last seminar, filmed in Andorra in July 2004, in which he explained and demonstrated the tsuki. Our memories coupled with such impressions enable us to experience and share the physical sense of Sensei Kase within our own training.

At the end of the ceremony we bid a final farewell by laying the white roses next to the urn. Many guests shared their anecdotes of Sensei Kase. Not only were his great achievements a central theme but also his very humane and personal side. Through their words, people like Hiroshi Shirai, Pascal Lecourt, Gerald Dumont, Livia Castro, Marc Stevens, Sivathan Samedy, Jean Paul Lavarato Milo, Vilibor Dimitrijevic and Sandy Hopikins consoled the mourning community. At the close of the celebration the guests said good bye to one another and with plans for the future began the journey home.

In the memory of Sensei Taiji Kase I will continue to practice my karate and to teach his ideas to future generations of Karateka. He gave us everything he could in order to enable us to continue his legacy. His passing is an irreplaceable loss for the complete karate world.